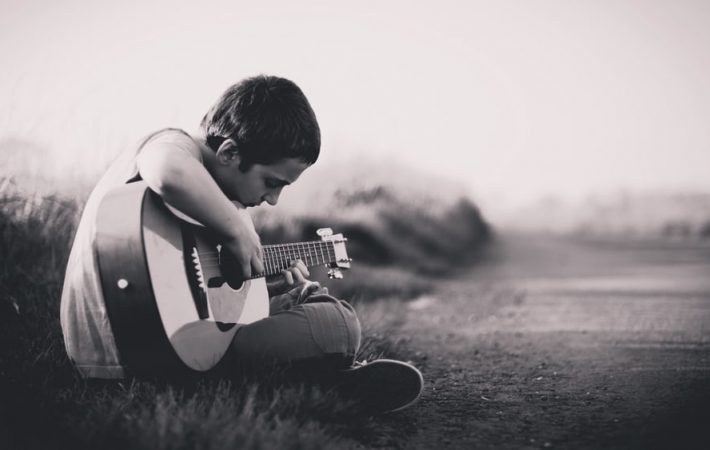 A common view amongst guitar players is that you just practice and push through the pain and you’ll be okay.

In my experience, someone with such an approach often sees practice as just playing something over and over in the hope that it somehow clicks…and that the pain will simply go away.

They have not worked on solutions to the challenges inherent in playing the instrument, nor often examined their own approaches and idiosyncrasies that may well be holding them back from advancing.

Focussed practice is essential for success. If one is simply moving their fingers about without that errors will be allowed to manifest…and we don’t want that!

There are many aspects of focussed practice we can explore, but for now we shall just consider one, and that is our relaxed approach to the instrument. We don’t need to fight with it, and we shouldn’t have to do so. Assuming the guitar is well setup and ready to play, then our approach is paramount to our success. If not sure about the setup take it to a luthier or music shop with a repair service and get them to check it out for you.

Watching a great player on the instrument you will notice the lightness of touch they seem to possess, and how they can play something and make it appear to be effortless. There is a relaxed approach to playing, even when the piece at hand requires a lot of attention to detail and is technically challenging.

Tension is something that can quickly unravel someone’s playing, or put a ceiling on their ability to progress.

Tension can be found in many aspects of playing, from the pressure exerted by the fretting hand to the neck, pressure exerted onto the pick (if playing with one), to pains that appear in the wrists, forearms, back and shoulders. It creates limitations and frustrations, so how can we remove it?

A lady I used to teach classical and fingerstyle guitar to would always reveal sections of a tune that she found challenging by taking in a massive gulp of air just as she approached the difficult notes. She would also speed up noticeably as she tried to race through the section and get it over with. Doing so just made her more likely to fail. Natural breathing is important, because when we stop it does make us tense up. This lady has not been the only student I have taught who has had troubles with breathing naturally at all times.

So that is the first thing to examine in your own practice and playing routines. Are you breathing normally? If not, try and identify the spots at which your breathing changes. We’ll discuss this more a little further down the page.

After considering your breathing, next consider your own approach to the instrument. Is it introducing tension that is causing you to falter during a song? I used to teach a teenage boy that had a habit of raising the right shoulder up to his ear when picking fast. I remember him learning an AC/DC song and the solo was a little too fast for his level of ability, so we discussed how to work on his technique so that he could play it. He just kept trying to play it at the recorded speed over and over without taking the time to work through his limitations at that particular time, and to find a solution to his challenges. When he raised his shoulder to his ear I could tell how uncomfortable he was and how much it impinged on his playing. We talked about it regularly in lessons, but he didn’t every try and correct this tendency during his practice sessions at home, so he simply kept reinforcing this bad habit.

And that is important to realise. It is not practice that makes perfect; we must practice with perfection as the goal. Whatever we practice is what we will get better at; if it is a mistake that is what we are improving.

So why did he keep lifting his shoulder to his ear? Inherent tension in his body made him do this, and then he kept doing it, so it became a habit. I’ve read that a bad habit takes 7  times the effort and work to remove it from one’s playing than just learning to do it ‘right’ from the start.

So examine the lightness you can take to fretting a note or holding down a chord. Just take one note and see how little pressure you can exert on it to sound. Just focus on that one note and keep working on how light you can be, Now repeat the same exercise with a chord.

Practice very slowly. There is no need to rush. Be very intentional in being relaxed. In fact you should practice so slowly that you take several seconds to move your fingers and hand into position. Moving this slowly makes it impossible to retain tension in your body, and another benefit of this is it will allow your brain to process what is happening and program your fingers to respond to the task at hand.

Now take two chords and move slowly between them. Allow yourself to breath deeply. Constantly examine your body; the hands are obvious, but your whole body is part of playing. Tension also tends to be cumulative, so the slight tension in your hands can contribute to your arms and shoulders being in a lot of discomfort when playing.

This approach, which is sometimes called ‘no tempo practice’, is akin to muscle memory, but I think one or two steps deeper than what most people do when working on something.

Moving beyond playing a couple of chords like this extend it to a passage from a song, but retaining the same approach. Be observant at all times of tension anywhere in your body, and when you recognise it, try and determine what it causing it.

It might be that one hand is holding the guitar or pick too tightly, and often the hands mirror one another. If you are gripping the guitar too tightly then it might be causing tension in your forearms, shoulders, back and neck. You might be sitting (or lounging ) in a way that pushes the instrument into a position that is not conducive to playing at your best for either hand. When sitting on a lounge or comfy chair, watch out for the angle of your wrist as it comes to the neck. Or you might be not breathing, or doing a combination of such things.

So practice playing with an intentional focus, practice on developing a light touch, and every so often stop and check for any tension of awkwardness that is slowing you down or causing you to stumble. Practice the discipline of playing so slowly that a tempo is non-existent. In doing so you will find it just about impossible to retain any tension in your body, and you will be developing the fine motor skills required to play the guitar well and play in a pain-free manner, and you will progress further as a player which will bring more enjoyment to you, and that all want to make you practice even more…which will make you even better!